In the Light of a Shadow by Glenn Kaino

I’ve visited this huge piece at Mass MoCA three times so far. It dives deep into the events of two Bloody Sundays, woven into the events of today and the continual struggle. As we walk through the piece, shadow figures in protests and battles float across the walls. Ships carrying enslaved people are shown crossing the ocean. A driving beat and nightmarish music underscore the growth of capitalism in the face of humanity.

Perhaps the most moving part is the video at the end of Deon Jones, who was brutalized by police while protesting the murder of George Floyd. After seeing video of Mr. Jones being trapped and then recovering with a huge gash on the side of his face, we see him beautifully sing Sunday Bloody Sunday by U2. The overall massive installation is hypnotic, shuddering, and mournful. It reminds us of the epic size and scope of the struggle for civil rights, worldwide. 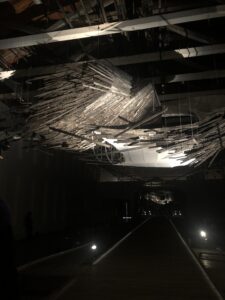 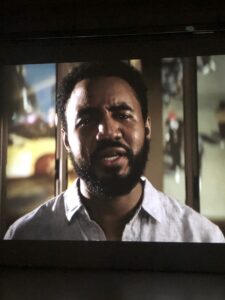 Glenn Kaino: In the Light of a Shadow is inspired by the connection between protests across the globe, specifically those in response to the tragic events known as “Bloody Sunday” from Selma, Alabama and Derry, Northern Ireland. The exhibition spans the entirety of MASS MoCA’s signature football-field sized Building 5 gallery with an immersive installation that explores the power of collective action in forging a more just world.

The installation takes the form of a galaxy inside of which viewers will be immersed and surrounded by moving shadows and evocative soundscape. The theatrical space includes a representation of the Shadow V – a boat that was bombed by Northern Ireland’s IRA, killing the British royal Lord Mountbatten – crashing into itself. Surrounding the boat are thousands of rocks, hundreds of which become tiny satellite ships. From these objects floating in space, a complex shadow show plays out before our eyes, placing us in the footsteps of protests past. Also in the main gallery is a circular sculpture made of metal bars, which, when struck in sequence with a baton, play the melody from U2’s “Sunday Bloody Sunday,” transforming a barrier into a plea for violence, protest, and civil rights infractions to end. Alongside the sculpture will play a video that Kaino recorded with Deon Jones, an activist and singer who was brutalized by the police while protesting the murder of George Floyd. Made in collaboration with Larry Fong, Butch Vig, Jon Batiste, and Glenn Kotche, Jones and Kaino turn the classic song into a rallying cry for the present.

Ultimately, Kaino’s In the Light of a Shadow is about remembering the past and forging a hopeful path forward.