The Genius of Maurice Sendak

Since I was a kid, I’ve been a huge fan of Maurice Sendak. In the Night Kitchen was one of my favorite stories as a boy, in part because of its open innocence, its sense of adventure and the darkness all around the world, which was so common in Maurice’s work. He never pandered or lied to children. He let them know the world could be dark, but there was always hope. So I was shocked to learn after I moved to Cambridge five years ago that Maurice kept a home here and was a sometimes Cambridge local. I was thrilled to meet and get to know Lynn Caponera and Arthur Yorinks, his longtime collaborators, as well as Dona McAdams, who all continue Maurice’s legacy with the work with the Maurice Sendak Foundation. We worked with them four years ago when we produced Really Rosie and the foundation provided scholarships to so many students throughout the next year at Hubbard Hall.

Through Lynn and Arthur, I learned that Maurice was not only a brilliant artist, author, and illustrator, but that he had also created scenic and costume designs for theater and opera later in his career. He created designs for his classic Where the Wild Things Are when it was adapted into an opera and for a new Nutcracker ballet based on his designs, as well as for Mozart’s Magic Flute and Prokofiev’s Love for Three Oranges. Maurice had also started his own In the Night Kitchen theater company with collaborator Arthur Yorinks, aimed at creating new and exciting children’s theater around the country. Unfortunately, Maurice died before this new theater company could flourish.

While I knew of his work in scenic and costume design, I had never seen his designs until by chance two weeks ago I decided to visit the Morgan Library (www.themorgan.org) in New York City while on a break from my work at the New York State Council on the Arts. By luck I stumbled onto one of their major current exhibits: Drawing the Curtain: Maurice Sendak’s Designs for Opera and Ballet. 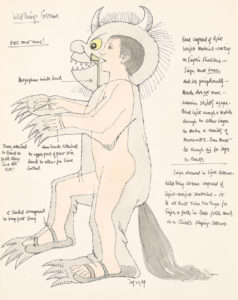 The exhibit includes dozens of Maurice’s designs for costumes and scenery, as well as some video of these designs in action. One can see Maurice’s brilliance on stage and how wonderfully his work suits children’s theater and opera. In his designs you can see Maurice’s notes, urging those building the suits to ensure the player can see and hear – and that the Wild Things’ eyes can move. Maurice’s typical care and rigor for the work shines through these notes and drawings. 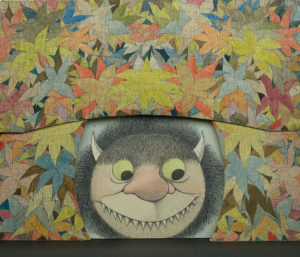 The show also exhibits a few final costume and puppet designs, as shown here, and some poster designs for the operas and Maurice’s Nutcracker. 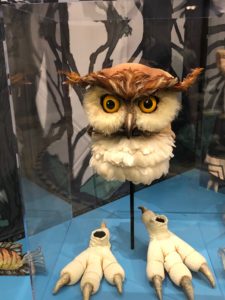 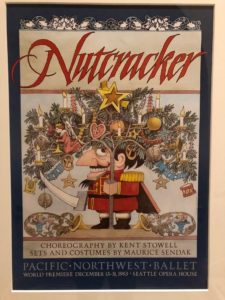 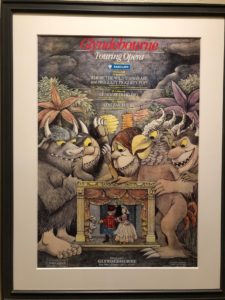 Here’s what the Morgan Library website has to say about the show:

“The exhibition will include nearly 150 objects drawn primarily from the artist’s bequest to the Morgan of over 900 drawings. Sendak borrowed gleefully from a personal pantheon of artists, some of whom he encountered firsthand at the Morgan. Several such works, by William Blake, Wolfgang Amadeus Mozart, and Domenico and Giambattista Tiepolo, will be displayed alongside his designs. Although less well known than his book illustrations, Sendak’s drawings for the stage embody his singular hand, fantastical mode of storytelling, keen—sometimes bawdy—sense of humor, and profound love of music and art history.

Drawing the Curtain: Maurice Sendak’s Designs for Opera and Ballet is made possible with generous support from the Rita Markus Fund for Exhibitions, The Maurice Sendak Foundation, the Caroline Morgan Macomber Fund, Rudy and Sally Ruggles, and the David Berg Foundation, with assistance from Marilyn J. Friedland.”

This is design that captured the genius and rigor of his artistry as much as anything else he ever did – and teases us with what may have been. If Maurice were alive today, he’d be a major force in the theater, especially in children’s theater – and we are all worse off for that loss. But if we can borrow even a little bit of his whimsy and his outrageous sense of humor, we can honor his legacy ourselves and his work lives on in us.

Bravo to a genius – and to one of our former neighbors here in Cambridge. We miss you, Maurice.

This article was originally published in The Eagle on July 11, 2019.