The Susan B. Anthony Project

By David SniderFebruary 1, 2021No Comments

Our most recent theatre piece  at Hubbard Hall was The Susan B. Anthony Project, a new play with music that took three years to create, in collaboration with hundreds of community members and students. We bravely crossed the finish line and opened the show in October, even in the throes of COVID-19, with just 40 people in the audience (masked and socially distanced), two vocalists, recorded but original music by Bob Warren, three professional actors, and seven local public school students in the cast.  It was a fully interactive piece of theatre, bringing the ghosts of Mary Hubbard, Susan B. Anthony, and Sojourner Truth to vivid life, as they engaged students in a fierce conversation about Susan B.’s legacy (her successes and failings) and how the power of the vote must be preserved and protected for all of us. It also officially memorialized the presence of Susan B. Anthony at Hubbard Hall, as she led a Women’s Suffrage Convention here in 1894. Memorialized with both the performances and a new permanent history marker placed in front of the Hall. 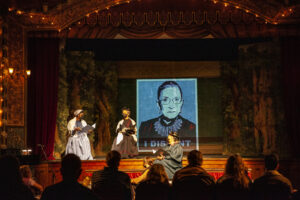 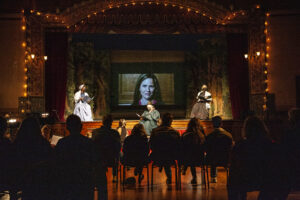 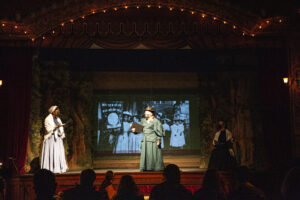 We worked with students in grades 4, 7, 9, and 11 in three public school systems in a series of workshops exploring Susan B. Anthony, those left behind by the movement, and the movement for Global Feminism today. Students wrote dialogues, poems, and speeches that became part of the final piece. Some of the students who wrote in the classrooms ended up performing in the piece.  Bob Warren was commissioned to create original music, and created songs for Susan B., Mary Hubbard, and Sojourner Truth that told their stories as well as a collectives song sung by the entire company at the end urging everyone to Rise Up and vote in 2020. 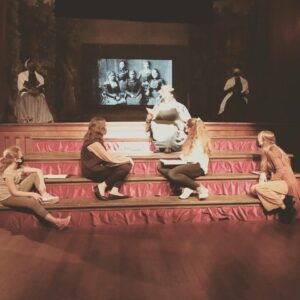 The play called up images of Ruth Bader Ginsburg, Sylvanie Williams, Harriet Tubman, and Amy Coney Barrett, as the characters dove into the history of Women’s Suffrage in this country. It reminded us of Mary Hubbard, the leader of Hubbard Hall for 25 years who established the Hall as the village town commons, where rallies, lectures, performances, and graduations took place every week. It challenged us to remember our history while fighting for a better present and future.  I hope later this year we can return to doing such important work as this. 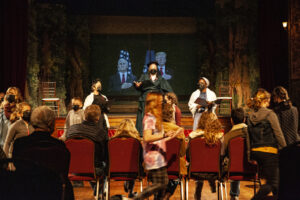