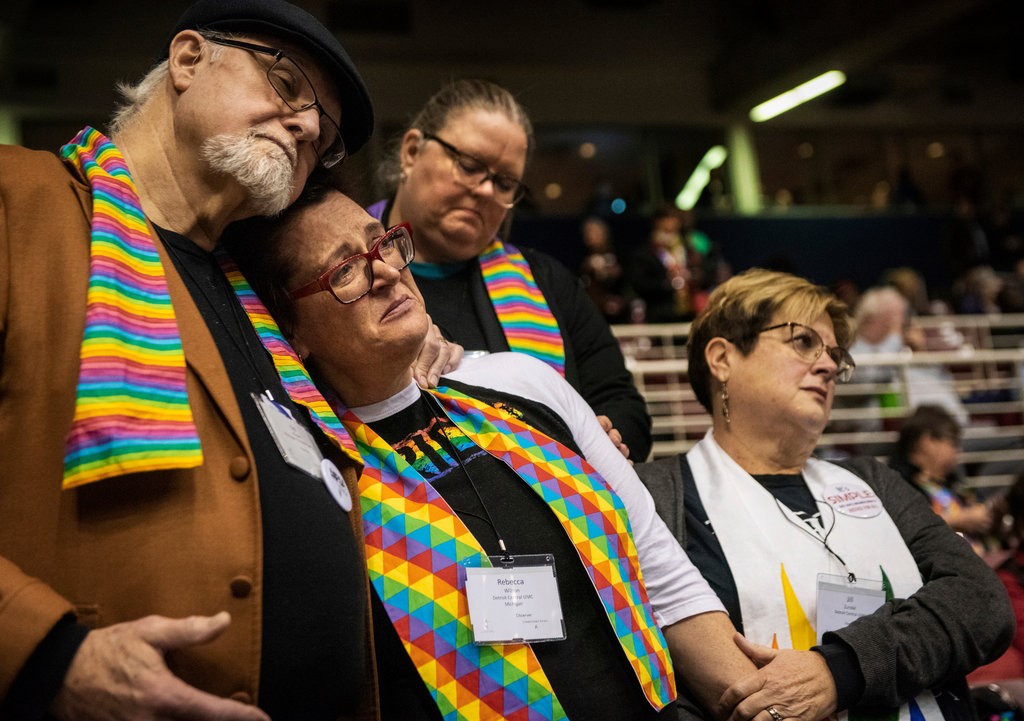 Yesterday a special conference of The United Methodist Church voted to further ban same sex marriage and gay clergy from the church.

This vote rejects, dejects and discriminates against people the church should be engaging and serving.  It sets an isolationist path for the church, leading to potentially greater growth world wide (as the Times points out is happening in domestic ultra conservative Christian groups) but ultimately cutting sharply away from the church’s purpose and origins.

I was 16 when I left The UMC.  My father was a United Methodist Minister (and still is my minister in many ways, the only one I’ve had and rely on and who married my wife and me over 17 years ago).  I grew up with a deep sense of God and connection to something bigger – something I’m still defining for myself.  My experience of the church, though, was mixed.  While I witnessed many good people faithfully worship and work in ways that expressed their own connection with God, I also saw how the sausage got made.  I saw hypocrisy in many who attended church to check their holiness box for the week – and then went on to mistreat others and themselves during the regular work week.  I hoped for something more and ultimately decided I wouldn’t find it there.  I ultimately found it in the arts and the theater.

But my father and I in many ways grew up together, as sometimes I’d push the envelope of belief and boundaries.  When I was a kid, my parents wanted me to wait to take communion until after I was confirmed as a member of the church (a process of study and testimony at typically age 12-13, similar to many faith-based transitions into adulthood).  But at the same time, my father would invite “all those who love Christ” to the table at every communion.  So when I was about 10 or 11, I decided to get in line for that sweet bread and wine (actually Welch’s grape juice), since I did believe in and love God.   My father’s laser eyes at me as I joined the line, ate and drank, told me I’d be in trouble when we got home.  When he challenged me later, I said “but you said all who love Christ are welcome at the table.  Why would I wait til after confirmation?”  From then on I participated in communion when I wanted and I think my father saw children coming to communion a little differently.  We both grew in God’s Grace.

The news of the vote yesterday frustrates many in The UMC, as the New York Times points out that the majority of people in the U.S. church believe all people should be welcome at God’s table, not just straight people.  So it seems the time for a New Methodism may be at hand.  Time for those of conscience in the church to take action, to break away from the global body and start anew.   John Wesley went into the villages and the wilderness, often alone, to spread the word.  The Methodist Church has reinvented itself before and can do it again.  It’s time for United Methodists to stand up for what’s right and speak out.   It’s time for a church that fits and reflects our world in the 21st Century.  It’s time to start again.

This young delegate and fellow New Yorker (and the response to his remarks) brought light to this dark day and may have foreshadowed a new movement, a New Methodism.

“They didn’t know God could love them, because their churches said God didn’t.”   Indeed.

Post Update:  On March 14, the New York Times reported that voting discrepancies were uncovered in this vote, with at least four invalid votes being cast in support of the ban.  The discovery of this fraud adds fuel to the fight and suggests that the church must either cast another vote or get ready for the inevitable split to begin soon.