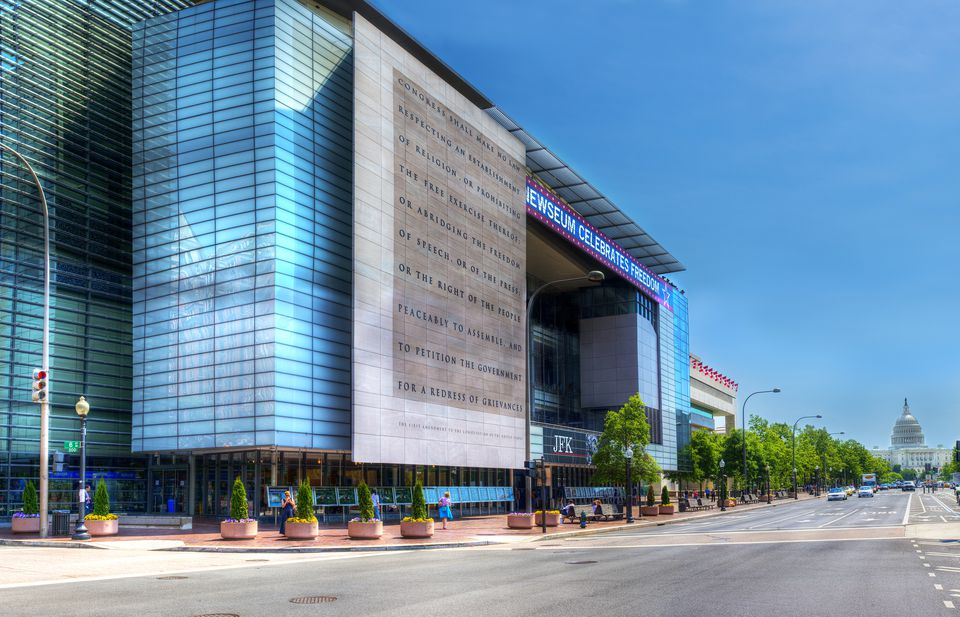 Earlier this month The Washington Post shared that the Newseum building in Washington, DC has been sold to Johns Hopkins University:

Then we got this:

The Newseum was a grand tribute to the power of journalism. Here’s how it failed.

For those of us lucky enough to visit and enjoy the Newseum, this is a big disappointment, though not much of a surprise.  The Newseum has been bleeding cash since it re-opened at its opulent location in 2008. The $25 fee to enter never really covered much of their $61M budget (with only 800,000 annual visitors compared to over 8M at the Smithsonian’s Air and Space museum, where admission is free) – and according to previous reports in the Post only about 10% of their budget was covered via donations.  The Freedom Forum, the foundation that founded the museum in 1997 in Rosslyn, VA, and has been pumping cash into it since its founding, finally admitted it cannot keep covering its budget shortfalls. A quick look at previous articles, showing how the CEO stepped down in 2017 the same day the board announced a new financial review, and the stepping down of its COO in August, predict this sad ending.  Why sad? The museum is not dissolving – yet. The board says it will seek a new location. But where will it go? What huge space exists in DC or nearby that could house its assets in the same wonderful way? The museum is full of interactive exhibits and prized relics – like pieces of the Berlin Wall – and the top of part of the World Trade Center. So even the sale of its building at $372M (to help cover the $300M it still reportedly owes on the building) may not preclude the sale of some of these assets – or the cold storage of them while the museum tries to figure out a new location.

There is no planned new location at this point. If you sell without a plan for what’s next, it means there might not be a “next,” but instead a slow, quiet shutting down. The Newseum has great exhibits, a combination of real print exhibits and video interactive games, which take you through the history and importance of news in this world. It also has a critical mission in this day and age – to promote, celebrate and support the need for a free press (though their gift shop stumbled last year while temporarily selling “Fake News” t-shirts themselves).

So while the Newseum’s business model stumbled in part because its opening coincided with the Great Recession of 2008 – and in part because it relied on presumed income from news organizations (now struggling themselves), its move (closing?) begs the questions: how does a 21st century both deeply engage audiences (with great new visuals and vital exhibits) while also being financially solvent?  How can those of us in the arts both move our work into the forefront (with a great new location or facility) while also ensuring our work is sustainable?  It seems to me it obviously requires a continual balancing act – ensuring we’re ambitious while being realistic. And ensuring that we’re not relying on one donor (the Freedom Forum) nor one industry (the news media) for our income.  At the same time, when the warning signs come a calling (through multiple year deficits or major staff resignations), we need to address these issues immediately and boldly – adapting our models while staying true to our missions. And never be afraid to say “we have a problem.”  So that it’s never too late to change. Hopefully the Newseum will find a new building soon – and find a new model that allows it to continue to serve and thrive as a vital cheerleader for our freedom of speech. At the same time it’s another warning for those of us with facilities – be ambitious – but be ready.

More on the Newseum:

The Newseum may close after a decade of financial struggle, according to officials who said in August that they had begun a financial review. Chief executive Jeffrey Herbst stepped down the same day. Officials at the Freedom Forum, the primary supporters of the Pennsylvania Avenue facility, said the foundation has spent more than $500 million to build and operate the museum, which first opened in Arlington before moving to Washington in 2008. The Newseum will remain open during the review, which is expected to take several months. newseum.org